I like the Technakohl Liners from MAC for the fact that they actually adhere to my waterline pretty well. MAC desribes "Photogravure" as a soft black with brown undertones. It looks more brown than black on my eyes or when swatched. 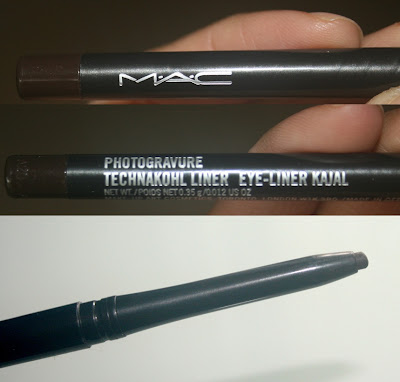 These retractable eyeliners are supposed to be waterproof and smudge-proof. They do take a while to set - I would say a bit longer than what the Urban Decay 24/7 Glide on Pencils take. Once set, they are not totally budge proof. They do transfer quite a bit but, definitely not to the extent that I end up looking like a panda. Stays put for 4-5 hours(thats how much wear time I get from most waterproof eyeliners in general, except Clarins). You would definitely need an eye makeup remover to completely take it off. 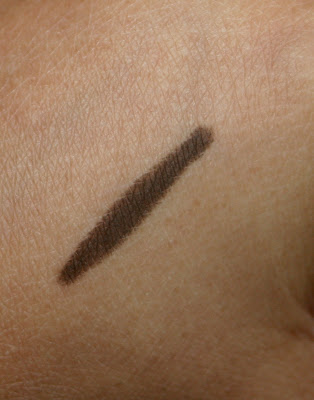 The texture is quite soft and doesn't tug or pull. I've even tried it as an eye base while doing a smokey eye and it works perfectly fine.
Here's a comparison swatch against MAC Feline and Urban Decay 24/7 in Zero. I was surprised to see that it actually looks really brown when compared against some black liners.
I won't say "Photogravure" is a very unique shade. But, it's great for a soft, smudgy, smokey look and looks amazing all by itself too.
Overall, nice to have and worth the price tag. I would definately love to try out some other shades of the Technakohl liners.
Have you tried MAC Technakohl liners? Do you like them? What are some of your favourite eyeliners?
Posted by Appu