Urban Decay's Zero has been one of my top picks when it comes to super smooth, black eyeliners. And it's no secret that I love black liners and kohls. So, when Urban Decay came out with Perversion, I had to check it out. 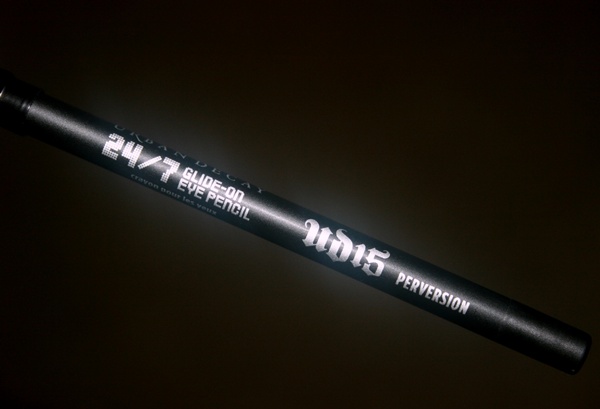 Perversion($19) is the richest, deep, darkest black eyeliner in the Urban Decay's 24/7 Glide-On eye pencil range. The special packaging with a black cap is unique to perversion. It is definitely one of the darkest liners I've tried so far. The color has a teeny bit of sheen when compared to Zero. The liner also has a slick feeling, almost too smooth to glide on. If you have extremely oily lids, this may be an issue. Since it is jet black, the color does tend to look a little too stark on lighter skin tones. I love it more along the lower lash line and waterline since it smudges out really well, adheres nicely and stays put. The staying power is comparable to the other Urban Decay liners which is about 5-6 hours on me. I do, however have a big gripe with Perversion. As much as I like the dark color and the rich texture, it tends to irritate my eyes after about 2-3 hours. I could feel a slight irritation along the waterline that I've never experienced from any of the Urban Decay liners before, not even the ones with glitter. The ingredients list contains dimethicone, something I've never seen in other Urban Decay Glide On liners before, which is something to keep in mind. Here are some swatches and comparisons with other black eyeliners like Urban Decay 24/7 Glide On Pencil in Zero, MAC Feline and L'Oreal Voluminous Smoldering Eyeliner.

Overall, if you like black eyeliners and want something that is truly black with a rich pigment, Perversion fits the bill. I was a little let down by the slight stinging sensation. I'm not sure if I got a defective piece or if this is how it reacts on certain people. I'll be sure to update the post if at all this changes at some point. As of now, if not for the way it reacts on me, I would have been madly obsessed Perversion.

What are your thoughts on Urban Decay 24/7 Glide On Eye Pencil in Perversion?